The Kaspersky Lab Industrial Control Systems Cyber Emergency Response Team (Kaspersky Lab ICS CERT) continues its series of articles devoted to analyzing vulnerabilities in industrial automation systems across the globe. In conducting such research, Kaspersky Lab reports any information regarding vulnerabilities to affected vendors in accordance with coordinated vulnerability disclosure best practices. We would like to thank General Electric for its cooperation and coordination with regards to this research.

Not every organization is able to immediately install all critical updates on its various industrial system components. As a rule, updating industrial automation system software is a complicated procedure that is potentially risky for the stability of the systems involved and for the entire industrial process of the enterprise. The problem of quickly installing and configuring critical updates may be due to a number of factors:

This state of affairs inevitably results in a large number of unclosed vulnerabilities, including critical, not only in software components of industrial automation systems, but also in those parts that are traditionally regarded as the classical IT components of ICS, including operating systems, document processing software and other programs used in the industrial infrastructure.

In part, the large number of unclosed vulnerabilities may be the result of an enterprise lacking effective IT security policies to cover software updates for industrial automation system components.

All statistics were received via Kaspersky Security Network (KSN), a distributed antivirus network, from those KSN users who had explicitly consented to statistical data being sent anonymously from their computers.

In our previous article, we focused on product security updates delivered by Rockwell Automation, a popular industrial hardware vendor. This article discusses updates to General Electric products. We look at vulnerabilities that were known at the time of writing – a list was prepared using the MITRE CVE database. Updates that close these vulnerabilities were released by General Electric in 2012-2016. Not all publicly known CVEs are represented in this study, only those for which we were able to get a representative sample.

For each of the vulnerabilities, we calculated the proportion of vulnerable to non-vulnerable systems on industrial computers of Kaspersky Lab users. The results are displayed below. It is important to emphasize once more that the data reflects the situation on the machines of Kaspersky Lab customers who voluntarily participate in the KSN program only, and may not represent the distribution of vulnerable and non-vulnerable systems on all industrial computers of General Electric customers.

CVE-2012-4689
Remote attackers can use a specially crafted HTTP request to cause denial of service in CimWebServer.exe, which is part of GE Digital Proficy HMI/SCADA – CIMPLICITY versions 4.01 through 8.0 and Proficy Process Systems with CIMPLICITY. 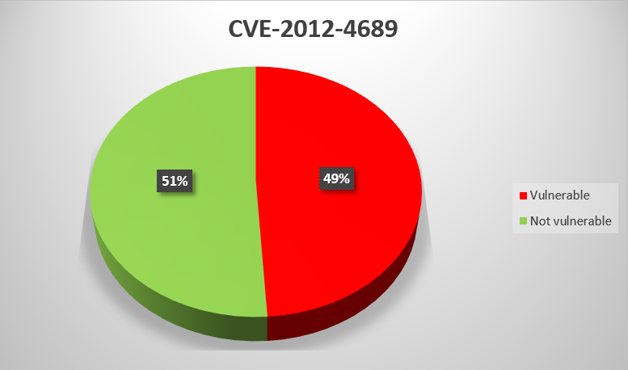 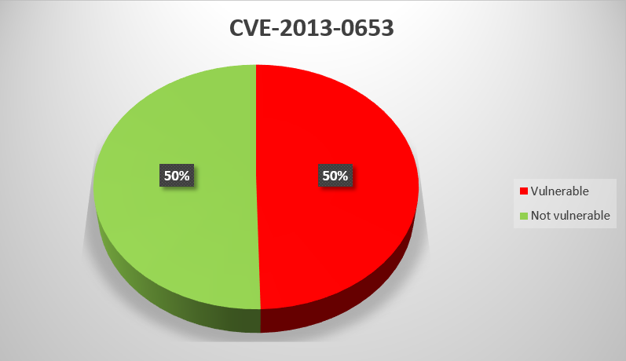 CVE-2013-0654
Remote attackers can use a specially crafted packet to cause denial of service and execute arbitrary code on the target system due to a vulnerability in CimWebServer, which is part of GE Digital Proficy HMI/SCADA – CIMPLICITY versions 4.01 through 8.0 and Proficy Process Systems CIMPLICITY. 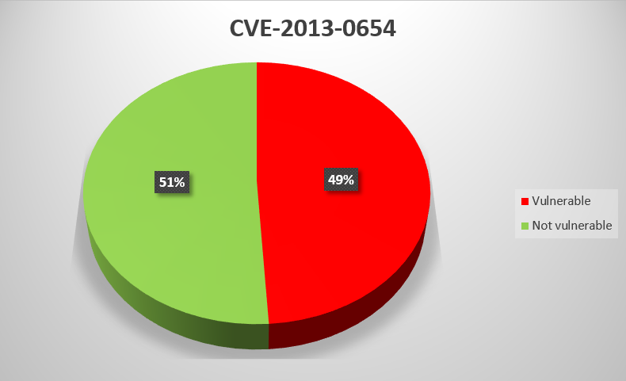 CVE-2013-2785
Multiple buffer overflows in CimWebServer.exe in the WebView component, which is part of GE Digital Proficy HMI/SCADA – CIMPLICITY versions before 8.0 SIM 27, 8.1 before SIM 25 and 8.2 before SIM 19, and Proficy Process Systems CIMPLICITY, allow remote attackers to execute arbitrary code on the target system using specially crafted packets to port 10212/tcp. 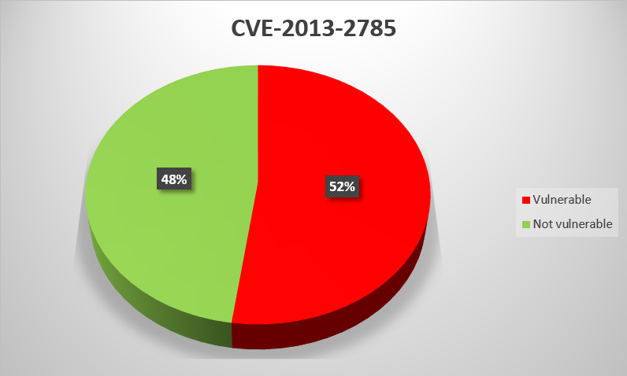 CVE-2014-0750
Directory traversal in gefebt.exe, which is part of the WebView CimWeb subsystem of GE Digital Proficy HMI/SCADA – CIMPLICITY up to 8.2 SIM 24 and Proficy Process Systems CIMPLICITY, allows remote attackers to execute arbitrary code on the target system via a specially crafted HTTP request. 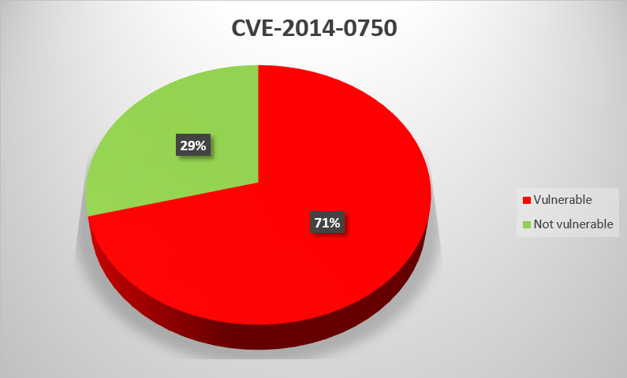 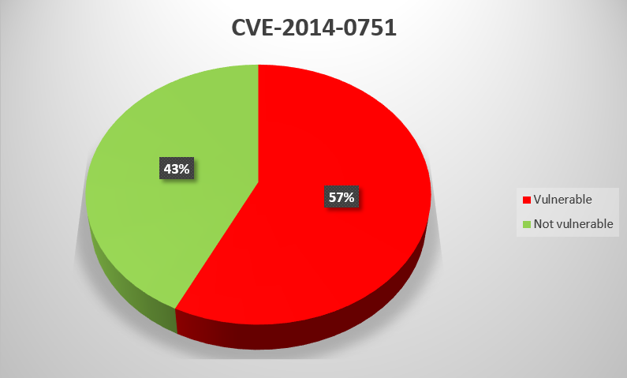 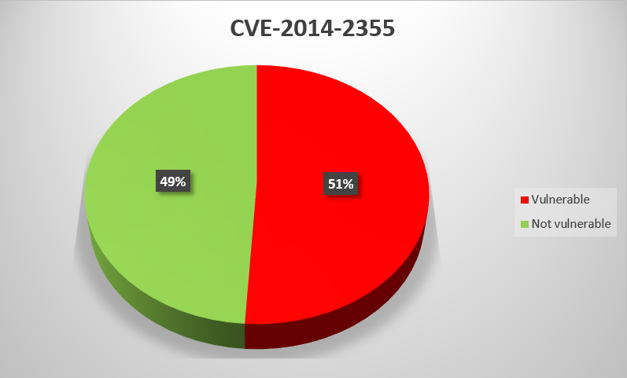 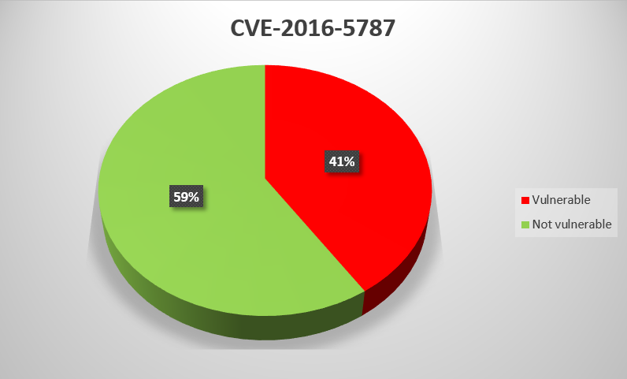 For virtually all General Electric product vulnerabilities that we analyzed, the proportion of systems with updates installed is between 40% and 60%. There is one exception – CVE-2014-0750, for which the figure is as low as 29%. The low proportion may be due to the fact that General Electric has not released a patch for this vulnerability, only instructions on how to fix it “manually”. 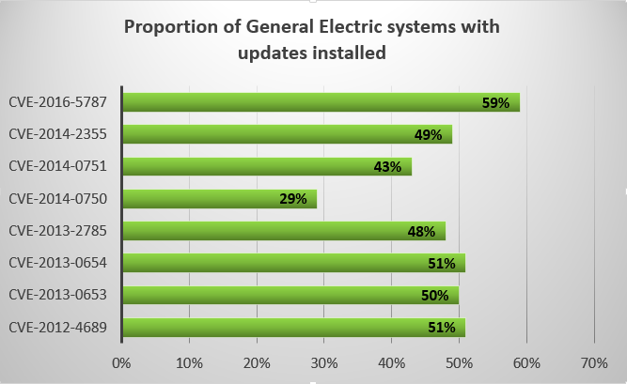 We recommend that administrators scan their systems for these vulnerabilities.

To automate the process of analyzing the system for vulnerabilities described in this article, we created OVAL definitions – special XML files with rules for automatic scanning.

Open Vulnerability and Assessment Language (OVAL) is a language that formalizes the representation of rules for scanning the system for vulnerabilities/installed software/applied patches and reporting the results of this assessment. OVAL is an open international standard that is part of SCAP (Security Content Automation Protocol). In the past, it was maintained by the MITRE Corporation now it is done by CIS (Center for Internet Security).

Despite all the difficulties in installing critical updates, owners of industrial automation systems need an objective view of their systems’ security status. In the table below, you will find links to OVAL definitions that we have prepared. You can use these to check your system for the vulnerabilities listed in this document. If a vulnerability is present, you can use links to General Electric’s problem elimination recommendations (requires registration on the GE website).

In cases where ICS owners are unable to install updates and critical patches without delay, we recommend minimizing the chances of critical vulnerability exploitation in systems with industrial automation. This requires carrying out a set of measures:

At General Electric, the security of data and critical infrastructure assets is one of our top priorities, and we build our machines and software with security embedded at multiple levels, working closely with our customers to identify and address potential vulnerabilities within installed systems.

The Industrial Internet is a shared ecosystem and we have a shared responsibility to secure it. GE believes that collaboration is the best path to effective cybersecurity solutions, which is why we are partnering with public and private institutions to strengthen IoT security and develop industry best practices.

GE encourages customers to adopt a responsible cyber maintenance plan that includes updating software to apply security patches and ensures the software is a supported version. GE makes SIMs and Service Packs available as they are released at GE’s Customer Center under the Knowledge section. Choosing to filter by product will guide users to specific product information. GE HMI/SCADA CIMPLICITY SIMs are cumulative and installing the most current SIM ensures users have all available fixes.

To receive immediate notices of security alerts and information, please sign up for notifications by visiting the customer profile page on the support site. Instructions are provided at How to sign up for Auto-Notifications for updates.

GE encourages users to be aware of any instances that might result in the public release of the critical patch status of systems as this increases the chances of exploitation.

In addition to data presented in the report, Kaspersky Lab ICS CERT is prepared to provide statistics on the distribution of vulnerable ICS software versions for specific countries or regions upon request from computer emergency response teams, law enforcement agencies and companies that provide IT security services to industrial enterprises in these countries or regions, as well as authorized representatives of industrial organizations that operate in these countries or regions. To request these statistics, it is sufficient to send an email to ics-cert@kaspersky.com.

Getting back on Treck: more vulnerabilities in the infamous TCP/IP Stack